The EFF has made a full transcription of the entire 2019 Pioneer Awards available here. 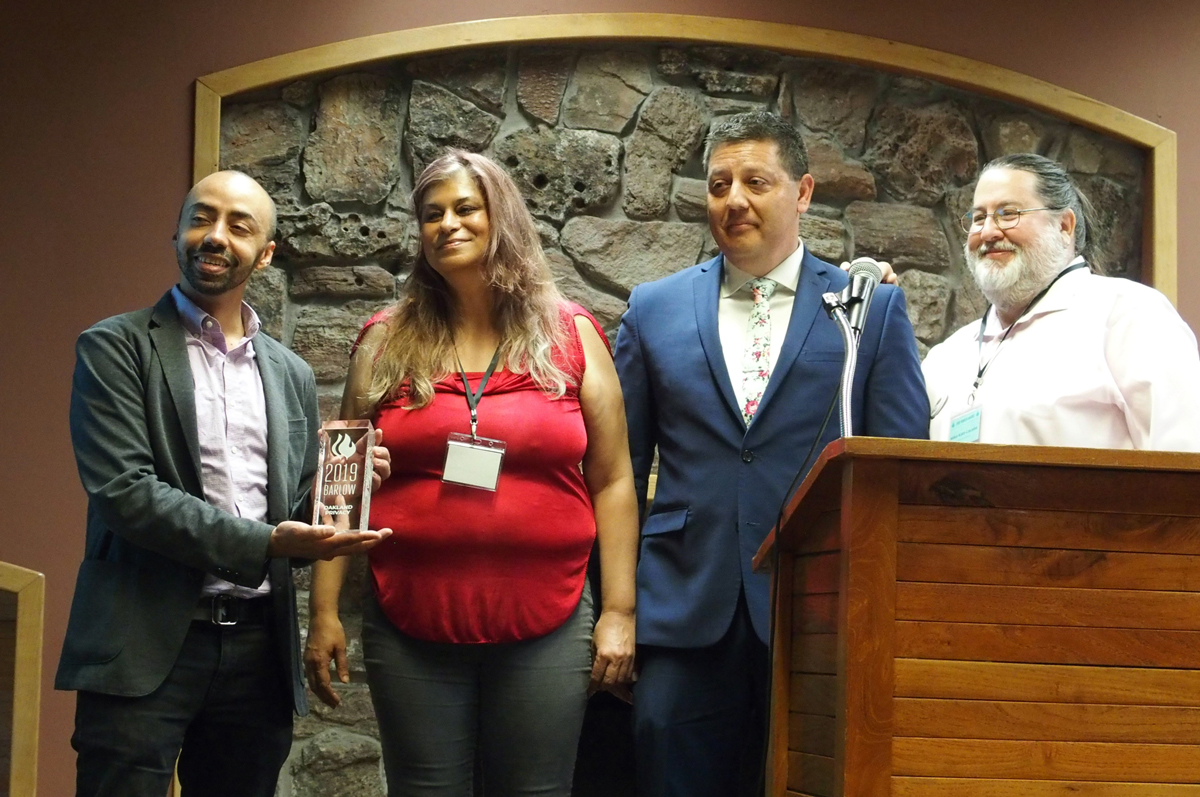 So my name is Brian Hofer, I recently left Oakland Privacy. I founded Secure Justice with a handful of our coalition partners that are, some of who are in this room tonight. And we’re going to continue carrying on the fight against surveillance, just like Oakland Privacy. I also had the privilege of chairing the city of Oakland’s Commission, as you heard earlier, and it’s an honor and a privilege to be recognized by EFF for the same reasons that my former colleagues have been saying, because you’ve been standing next to us in the trenches. You’ve seen us at the meetings, lobbying, joined in the long hours waiting at city council meetings late at night just for that two minute opportunity that Nash is now an expert at. You know how much labor goes into these efforts, and so I really want to thank you for standing next to us.

This path has been pretty unexpected for me. I quit a litigation job, was unemployed, and I read this East Bay Express article by Darwin BondGraham and Ali Winston based on public record requests that Oakland Privacy members had founded. And there’s a little side bar in that journal that the very next day, just fate I guess, that this upstart group Oakland Privacy was meeting and that I could attend it. It’s even more strange to me that I stayed. It was a two hour discussion about papier-mache street puppets and the people asking me if I was a cop when I walked in. Nobody wanted to sit next to me.

So when I finally spoke up and asked how many city council members they spoke to, the room got quiet. And so that became my job, because I was the one guy in the suit. At the honorable Linda Lye’s going away party a couple months ago, I remarked that if we had lost the Domain Awareness Center vote, I would have never become an activist. I would have returned to my couch. I spent hundreds of hours on that project, and I would have been really disillusioned. But March 4th, 2014, which was the vote, is still the greatest day of my life. We generated international headlines by defeating the surveillance state in the true power to the people sense.

It was quite a contrast the following morning, on the Oakland Privacy list, when the naysayers thought the world had ended in calamity. Little did they know, that was the formation of the ad hoc privacy commission; we were about to change the conversation around surveillance and community control. EFF is directly responsible for helping us form that privacy commission in Oakland, and so it’s my turn to congratulate you. Matt Cagle of the ACLU, Dia Kayyali, and myself were sitting around trying to figure out how to make it a permanent thing, and we noticed that another piece of technology was on the agenda. We didn’t have any mandate or authority to write a privacy policy for it. But Dia signed a letter with me asking that we be given that task.

It worked, and that established the Privacy Commission as a policy writing instrument that remains today. As our colleagues were saying, that’s been the launching pad for a lot of this legislative success around the greater Bay Area. It’s the first of many dominoes to fall. I want to close with a challenge to EFF——and not your staff—like any non-profit, they’re overworked and underpaid, because I’m sending them work and I don’t pay for it. I was supposed to insert an Adam Schwartz joke there.

I believe that we’re in a fight for the very fabric of this nation. Trump, people think he’s a buffoon. He’s very effective at destroying our civic institutions. The silent majority is silent, secure in their privilege, or too afraid or unaware how to combat what’s going on. So I’m going to tell you a dirty secret about Oakland Privacy: we’re not smarter than anyone else. We have no independently wealthy people. We have no connections. We didn’t get a seat at the table via nepotism or big donations. We have no funding for the tens of thousands of volunteer hours spent advocating for human rights. And yet as you heard from the previous speakers, the formula of watching agendas, which anyone with an Internet connection can do in their pajamas, submitting public record requests, which anyone can do in their pajamas, and showing up relentlessly, which in Berkeley and Oakland, you can do in your pajamas—that led to a coalition legislative streak that will never be duplicated. That four year run will never happen again. So I ask that you challenge your membership to do the same, pajamas optional. We need numbers. We need people to get off their couch, like me, for the first time. The Domain Awareness Center was literally the first time I ever walked inside the open city hall, and I apologize for the police lingo, but your membership is the force multiplier and it’s critical that more folks get involved. If you don’t already know, somehow next week turned onto facial recognition ban week. Berkeley, Portland, Emeryville, we have our Georgetown national convening where I know EFF will be. It’s critical that new diverse faces start showing up instead of the same actors. As Tracy said, they can see us from a mile away. We need more people.

In October, we expect four more cities to jump on board. Only one is in California, demonstrating that this isn’t just a Bay Area bubble. It’s got legs. And like the Domain Awareness Center moment, we’ve got a chance to change the national conversation, and we better take advantage of it. Thank you for this honor and thank you for this award.